In Memory of
Joyce
Keeping
1934 - 2022
Click above to light a memorial candle.
Memorial Candle Tribute From
Spencer's Funeral Home
"We are honored to provide this Book of Memories to the family."
View full message >>>
Send Flowers
Plant a Tree In Memory of Your Loved One
Click Here
Menu 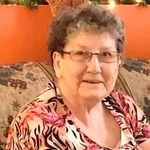 The family expresses sincere gratitude and appreciation to the Staff at the Connaigre Peninsula Health Care Centre for the compassionate care they provided Mom. As well, we would like to thank the home care workers for your support and dedication, often beyond expectation, in keeping Mom comfortable and tended to.