In Memory of
Kevin Thomas
Pierce
1964 - 2021
Click above to light a memorial candle.
Memorial Candle Tribute From
Spencer's Funeral Home
"We are honored to provide this Book of Memories to the family."
View full message >>>
Send Flowers
Plant a Tree In Memory of Your Loved One
Click Here
Menu 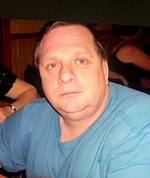 It is with great sadness that the family of Kevin Thomas Pierce announces his passing at the Central Newfoundland Health Care Center at Grand Falls-Windsor on Sunday, April 11, 2021, age 56 years of Harbour Breton.

Kevin was predeceased by his mother, Cora; father in law, Earl Abbott; grandparents, Thomas and Sarah Pierce, and, Donald and Alfreda Griffin.

Funeral Service was held on Wednesday, April 14, 2021 at 10:00 am at Spencer’s Funeral Home Chapel at Harbour Breton with Rev. Bruce Vallis officiating. Interment followed at the Anglican Cemetery, Harbour Breton.