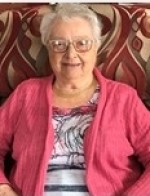 In Memory of
Sarah Melita
Barnes (Drakes)
1924 - 2020
Click above to light a memorial candle.
Memorial Candle Tribute From
Spencer's Funeral Home
"We are honored to provide this Book of Memories to the family."
View full message >>>
Send Flowers
Plant a Tree In Memory of Your Loved One
Click Here
Menu

Sarah Melita BARNES passed peacefully away at the Palliative Care Unit in Lewisporte on Tuesday, December 29, 2020.

Melita lived in Coomb’s Cove for most of her life. As a young woman, she visited her sister and family in Belleoram where she made lasting friendships. She often travelled with Merrill to communities where he worked on construction contracts, living in Gaultois, Ramea and Harbour Breton. Melita was a dedicated member of Holy Trinity Church and a lifelong member of the ACW. For many years she and Merrill played on Dart Teams and she enjoyed playing cards. She was a gifted seamstress.

Melita moved to a Seniors Cottage in Harbour Breton in 2011. In 2015, when she could no longer manage on her own, she moved to Pleasantview Manor in Lewisporte where she continued to make friends and enjoy life. Melita always had a twinkle in her eye and a smile for everyone. She will be greatly missed by all who knew her.

Special thanks to the staff of Pleasantview Manor & Palliative Care.

Funeral Service was held at Spencer’s Funeral Home Chapel at 10:00 am on Saturday, January 2, 2021 officiated by the Rev. Bruce Vallis. Interment followed at the Anglican Cemetery in Coomb’s Cove.

In lieu of flowers, donations can be made to South and Central Health Foundation.