In Memory of
David John
Perry
1949 - 2022
Click above to light a memorial candle.
Memorial Candle Tribute From
Spencer's Funeral Home
"We are honored to provide this Book of Memories to the family."
View full message >>>
Send Flowers
Plant a Tree In Memory of Your Loved One
Click Here
Menu 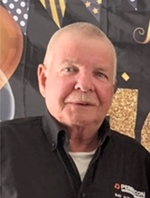 A man known for his love of the sea and his endless work ethic, David John Perry, 72 years of age, passed suddenly away on Monday, February 21, 2022.

Waiting for him with open arms is his adored son, Craig, who passed away in 2011. He was also predeceased by his loving parents, Gordon and Alimeta; brother, Patrick; sister, Anne and brother in law, Lloyd.

He will be greatly missed by his loving wife, Irene; his beloved daughter, Rhonda (Owen) and his two cherished grandchildren, Ryan and James. He also leaves to mourn his brothers and sisters, Mary, Gerard (Harriet), Chris (Carol), Fabian (Bella), Tom (Lolita), Sharon (Bob), Loyola, Joan (John), and Tracey (Cletus). He will be sadly missed but always remembered by his extended family and his large circle of friends, especially the Conne Pond community.

Visitation took place at Spencer’s Funeral Home in St. Alban’s, Bay D’Espoir on Tuesday, February 22 and Wednesday, February 23 from 2:00pm to 4:00pm, and from 7:00pm to 9:00pm both days. COVID regulations were followed.

Cremation to follow. Burial to take place at a later date.